Neutron stars are objects that are born as a result of supernova explosion when the mass of the star is not heavy enough to form a black hole. Such a superdense object with the mass of the order of a solar mass might have a diamater of only 20 km. Due to super high densities the role of the quantum mechanics is crutial to predict meso- and macroscale properties of the neutron star. Here, in my research I am interested in quantum vortices that form inside of the neutron star, where neutrons are believed to be in superfluid phase. Interaction between vortices in the inner core and neutron star crust is one of the possible mechanism of transfering angular momentum and ocassionally speeding up neutron stars - phenomenon known since 70's as glitches. Since 2017, when first gravitational wave were observed from merging two black holes and soon after of two merging neutron stars, there is a hope that these new data will shed some light on the internal structure of neutron stars. 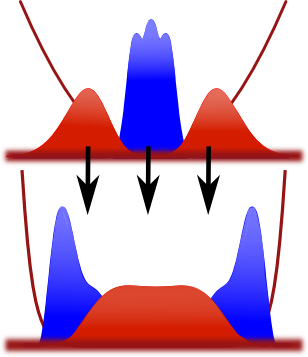 My main current scientifical interest is the problem of two-component mixtures of fermions in few-body systems. The mass imbalance in a one-dimensional system of strongly interacting particles leads to spatial separation in the single-particle density. In a harmonic potential, the heavy species is localized in the center, while the other species (light particles) is pushed outside of the trap. In the box trap, the heavy particles are pushed outside and the light component stays in the middle (see figure). This phenomenon does not depend on the number of particles and is quite robust to thermal fluctuations. What is more, this is a very basic effect that also does not depend on the statistics of particles (it is seen for Bose-Bose and Bose-Fermi mixtures as well).

During my master thesis, I researched the phenomena present in hot Rubidium vapors. Such medium can be used to generate and store a quantum bit of information. In a writing process, a laser pulse is used to create a spin wave in the vapors and a heralded photon that can be detected. Such photon carries information about the spin wave. In the reading process, one uses a laser pulse to annihilate the spin wave and create a photon with the exact state of the photon annihilated in the writing process. I showed how the dynamics of the system changes when the Doppler broadening (which causes both the reading and the writing at the same time) and thermalization are included. 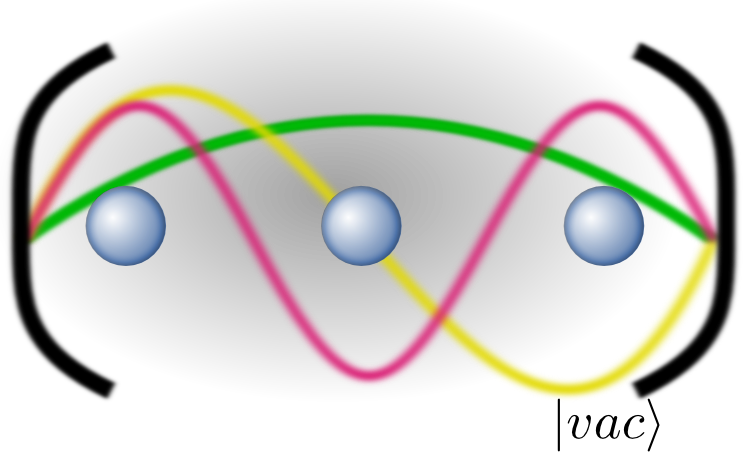 We studied three particles coupled to the vacuum state of a cavity. We found that after some time, the tripartite entanglement is produced in the system. This is surprising since the particles are not causally connected. The only medium that connects the particles is the quantum field inside the cavity.

There is nothing more enjoyable than solving a mystery. Many (simple) things are mysteries for me but the simplicity does not take a bit from the fun that is connected with playing with new (or sometimes quite old) ideas. 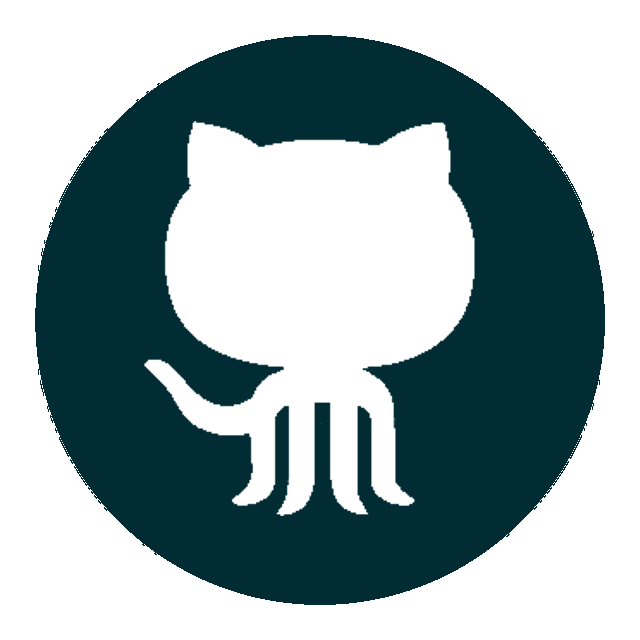 The problem is as follows: for a given list of cities (let's say the capital cities of South America) we want to find the shortest path. By going along this path we want to visit every city only once (the problem is known as Travelling Salesman Problem). Even for such a small number of cities, we have a lot (12!=479,001,600) of possibilities. It's easy to imagine that harnessing the brute force will quickly fail after adding a few more destinations. A possible way to solve this problem is a genetic algorithm which optimizes paths around the continent by evolution. We do not know if we will get the shortest path, but it is very close to the shortest (see figure). 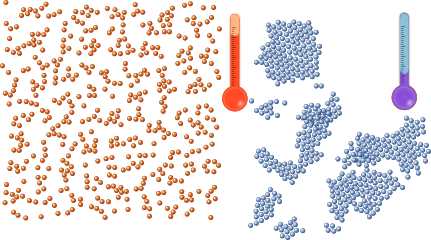 This project was about simulating the Lennard-Jones model of a gas. In this model, it is assumed that gas interacts via van der Waals forces. This many-body problem may be easily parallelized and solved much faster with CUDA graphic cards (orders of magnitude faster). Here in the picture, one can see a structure that is forming when the temperature is lowered and gas is solidifying.